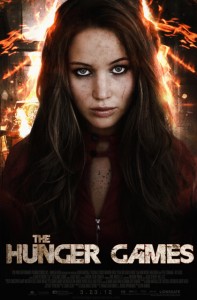 There is nothing I love more than a bucket of popcorn, sour gummies, and a good movie. However as college students, many of us don’t get to movies quite as often as we would like. When I was home over winter break I was able to re-grasp reality and figure out what was showing, but now we are back at school, and weekends are filled with award shows all highlighting a majority of movies I barely remembering hearing about. School sucks you in and if you’re lucky you get an update from your newsfeed with friends raving about a movie that you can then quickly YouTube for a preview.

So to help ease us from our class coma, I did a little research about some movies that are coming out later this spring. I don’t mind telling you I’m super excited about some of these titles. I’ve seen previews for most of them and they look like winners!

I haven’t quite jumped on the “Hunger Games” bandwagon but from what I’ve heard, the books are outstanding. Everyone—from children to adults, even my grandparents—have at least heard the title. After such a successful launch in the literary world, avid moviegoers are abuzz with anticipation for the movie to come out. The movie is starring Jennifer Lawrence as Katniss Everdeen. In just a few short weeks this film will be released and I’m sure will be an instant hit. Look for it in theaters March 23rd.

Another movie I’m just dying to see is “Mirror Mirror”, an adaptive Snow White Fairy tale of sorts. After seeing Julia Roberts in the preview I was instantly sold. Sometimes I pretend that life’s a fairy tale so why not partake in a little break from reality and indulge in this witty take on a classic tale. You can see this movie starting March 30th.

April is filled with movie madness. There is a whole plethora of pictures coming out, all of which I can’t wait to see. First we have a renewed classic coming to the screen one more time. Having been the top grossing movie of all time until Avatar, Titanic is set to re-hit theaters April 4 in 3-D. I don’t know about you, but I secretly want to go watch.

On April 6th, another installment of the American Pie movies is set to come out—American Reunion. It looks like this one is the “where are they now” movie when the original cast come back, for you guessed it, their high school class of ’99 reunion. I was skeptical at first. It may not be everyone’s cup of tea, but having grown up with three brothers, two of which are older, I have heard all about these movies. They have a certain comical value and great cast, so it may be worth seeing!

Rounding out the April the grouping is The Five Year Engagement. This movie comes to us from the directors of Bridesmaids and is starring Emily Blunt and Jason Segal. It looks like it’s packed full of laughs and fun. Ever since I saw the Devil Wears Prada, I’ve been a sucker for Emily Blunt. I will line up around the block to see this one—not to mention I’ve got weddings on the brain with both my oldest brother recently getting engaged, and my boyfriend’s sister set to get hitched this June! This looks like it’s going to be a crowd pleaser and I can’t wait to see it!

And last but not least on my list of movies to make sure you go and see is Men In Black III. I remember watching the first MIB with my brothers being confused but acting interested.  After more than 10 years since the original came out, I’m sure MIB diehard fans are already counting down the seconds until it’s May 25th release date. I want to be part of the hoopla and will of course make sure to go see it! Any move with Will Smith is worth watching in my book, and from what my brothers tell me, with 10 years to brainstorm, this one is sure to be an upgrade and just as exciting if not more so than the original!