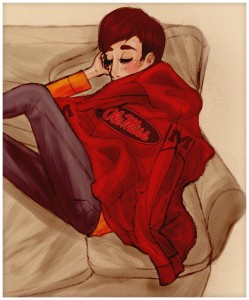 You remember the moment you laid eyes on as if it were yesterday. You had just received your acceptance letter in the mail, concluding one of the most anxious two to six weeks in your young existence. Elated and beaming with pride, your mother drove you to the college bookstore, furnished you with her credit card, and told you to “pick a few things out”. Alongside the baseball cap with the school’s initials embroidered in Old English and the overpriced binders with the official university seal on the front, you chose this item as well, thus beginning one of your most valuable relationships. To your classmates and teachers it was a just hooded sweatshirt but to you, it was a dauntless declaration of your upcoming future. Once you made it to campus, you were rarely seen without it. You wore it when you assisted in tearing down the goalpost after the “upset of the century”. It was on your back the night you first snuck into the campus bar. It kept you warm as you rode on the back of a wagon at your first sorority hayride. While you relished in its casual side, the effortless way it complemented your jeans and sneakers, you also found it had a fashionable side as well on the day you paired it with an oxford, rep tie and chinos. Through years of dinnertime pizza runs to the student union, tailgates and autumns watching the leaves cascade in the quad, it was a utility player in your wardrobe; always ready for service in a moment’s notice. As you now live your business casual life, listening to Vampire Weekend in your cubicle while daydreaming about a short time that was so long ago, you can’t help but wonder; which girlfriend’s dorm room did you leave it in.

Joey Wilkerson is a grad school student at the University of Louisville pursuing his Ph.D in College Student Personnel. He received his bachelor’s degree in English from UofL in 2006 and his master’s degree in communications from Bellarmine University in 2013. He also serves as a program coordinator in the school’s Cultural Center and the chapter advisor for the Alpha Chi chapter of Tau Kappa Epsilon. When he isn’t on campus, he can be found annoying his wife by dominating the TV to play video games, getting in bidding wars on eBay for rare vinyl and getting his infant daughter Blair prepared for her eventual sorority recruitment week.