I have to credit the idea of this blog to my high school newspaper. Every month, they would release the paper which included the roses and thorns from that month. I always enjoyed reading this section of the paper and I thought it’d be fun to make my own edition for the summer.

I will begin with the thorns from this summer in order to leave the best thoughts for last. The first thorn I have for the summer of 2012 is the excessive heat. As most of you have probably gotten to experience, the sun has been more than friendly lately. This is a picture from just today around the nation. It’s just plain hot. 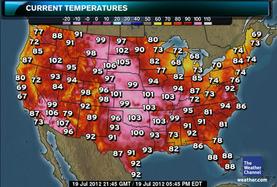 The second thorn I have for the summer 2012 are the wildfires. Due to the current drought, there have been a number of fires this summer including a mass of wildfires in Colorado making it the worst fire season there in a decade! Many homes have been lost due to these fires and it has been a huge thorn. The third thorn I have is the political advertising. You can’t currently watch tv without viewing an add of one politician bashing another, definitely a thorn. Now that we’ve talked about three thorns, lets move onto the roses!

The first rose is the olympics! Not only have I enjoyed watching the trials, but I am counting down until the 27th of July for the opening day. There is nothing better than watching your countries greatest athletes compete against other countries for a chance at the gold. The second rose I have is releated to roses, ABC’s The Bachelorette has been going on and for any of you who have been following, it’s been a great season. Emily Maynard had a selection of 25 gorgious men and has narrowed it all the way down to two.The final episode is set to air in the 3 hour special this Sunday the 22nd. The final rose I have for this summer is all the free time I’ve gained to spend with family and friends. Being home for the summer has been wonderful. Spending time with family and old friends is just what the doctor ordered to refresh and recharge before heading back to school, I hope many of you have had that same opportunity.

I hope my edition of roses and thorns helped you to think about what has been the good and the bad of your summer. Make the most of what’s left of summer before school starts, and try to make more roses!