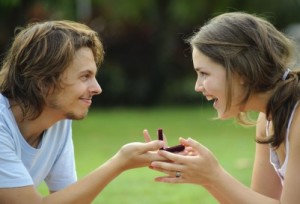 I’ve noticed lately a common theme among young couples, marriage! I personally know of four couples that are currently engaged/married that are 21 years of age or younger. One of the most popular young engagements right now is the engagement of Miley Cyrus and Liam Hemsworth. Cyrus is currently 19 years old while Hemsworth is 22. Young marriage seems to be either very promising or a very bad idea.

My grandparents were married when they were both 19 years old and this summer they will be celebrating their 50th wedding anniversary. I have learned by watching them that sometimes you just know when you’re young. If a young person can truly commit to the one they love and bypass their “wild 20’s”, they can usually make things last. Some may view it as a rush to grow up or a young and naive decision, but I see it as an early promise, one that most often cannot be broken.

Most people that get married young were high school sweethearts. Because they started dating younger, they often get married younger. If you think about it, if a high school relationship started let’s say, junior year, and it survived all the way through college before tying the knot, the relationship would technically be a six year commitment before a ring was even involved. This same couple could marry right after graduation at age 22. To the world, this couple seems very young. To this couple, it’s been six years.

Obviously it’s true that some young marriages don’t last, but isn’t that with any marriage? I have learned that age isn’t a factor, it’s just the love that you have for one another. Anyone who says someone is too young to love is clueless; anyone can fall in love it’s just whether or not they make the decision to hold on and fight for it. It’s never easy to go into college with a relationship and come out with the same relationship; it’s a choice to put love over anything else: distance, a wild time, being free. It’s a choice that says my relationship is worth everything and I’d do anything to see it through. Young love is a beautiful thing, as clique as that sounds, it’s absolutely true.

The four couples I know of that are young and either engaged/ married and four of the happiest couples I know. One was married a year ago last week when she was only 19. I know she wouldn’t trade her decision for the world. The other three will be married within the next two years all before they’re 22. They’re all happily planning their weddings and enjoying their lives with each other. I am sure that all of these couple will be eternally happy together. No matter what the skepticism is about young love, it’s not something to worry about. When you meet the right person I guess you just know, whether you’re 16, 21, or 35.